Oakland was a very pleasant surprise for us... mostly because we knew very little about it. Whenever anyone talks about the "Bay Area," it's almost always only about San Francisco, so it was extremely fun to get to know Oakland as well.

But before I dive into that, I'd like to introduce you to the two sweet pups we had the pleasure of taking care of - Penny and Paco. 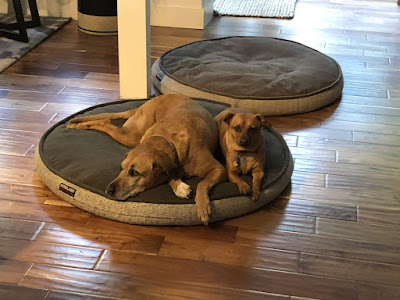 Penny is a 10 y/o tripod who wanted nothing more than to be able to go on hikes like her 3 y/o brother Paco. But we gave her a few minutes of trail time every day so she could experience the world of smells that make dogs so very happy. She just couldn't go very far or very long and with every walk back to the car she would look at you with big, sad eyes and say, "I know, I'm coming."

Paco, on the other hand, was a little fireball and couldn't get enough of the trails, which by the way was one of the biggest surprises about Oakland... the hiking there is amazing!

First of all, Oakland is more than just an exciting city on the bay. The back side of it rises to about 1500 feet and runs along the entire length of the city. This area is unofficially known as the "Oakland Hills" and contains miles of various parks and trail systems, all of which allow dogs to run off leash. Yay! 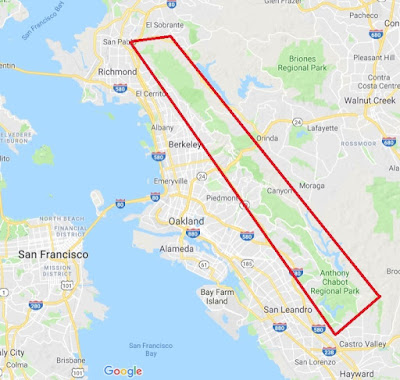 Not only can you see stunning views of San Francisco and its landmark bridges, but you can also submerge yourself into epic wilderness with just a quick drive up to Skyline Parkway. One side note: the town I grew up in, Duluth, MN is set up the same way AND also has a road that overlooks the entire length of the city below called Skyline Parkway, so I felt right at home there.

Here's one example of a park we hiked in with Paco called Sibley Volcanic Regional Preserve. It was remarkable. 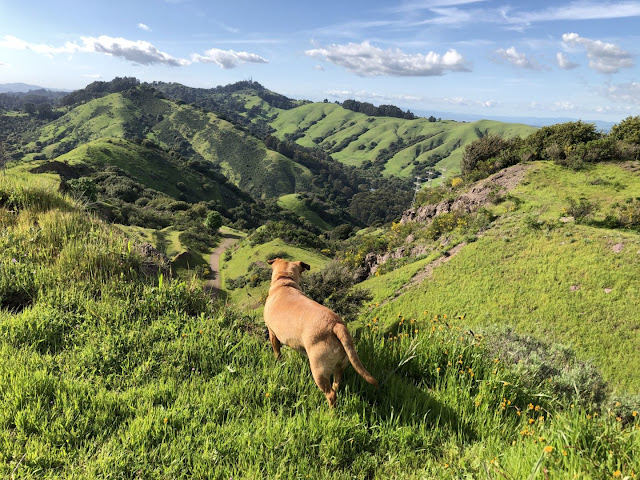 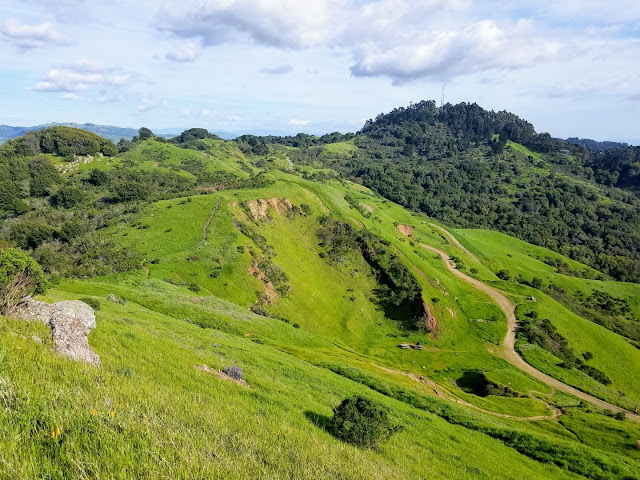 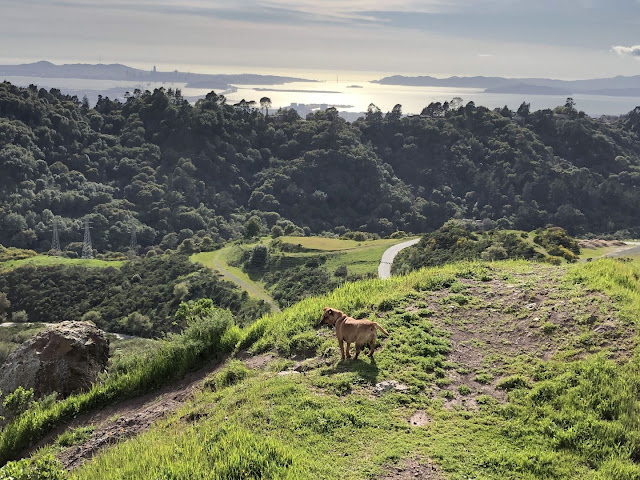 That gap in the water on the horizon is the Golden Gate Bridge in the picture above. Here is the same shot enlarged below. 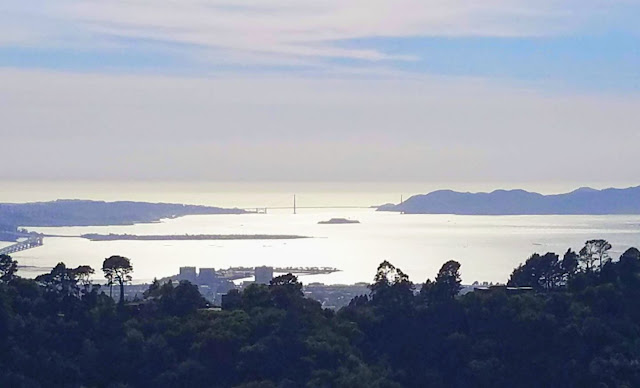 Meanwhile, back down by the water, you can enjoy an evening at one of the many restaurants and bars that overlook the harbor... 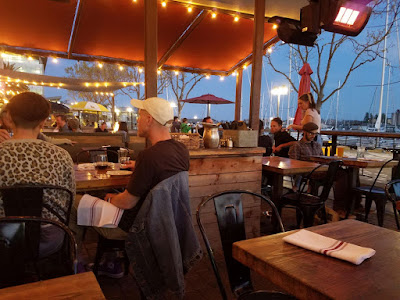 ...and catch San Francisco in the sunset at the same time. 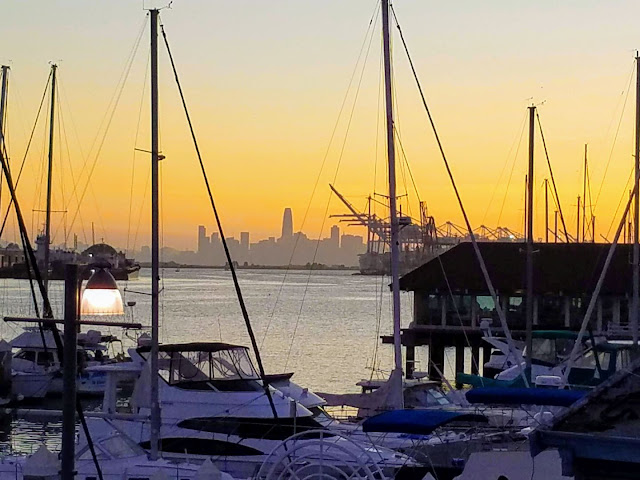 And finally, Lake Merritt. This gem sits right smack in the middle of the city and has a nice 3 mile walkway right along the water, which Charli and I ran on a regular basis.

All-in-all we found Oakland to be one of our new favorite places to visit. In general, everyone's first instinct is to head straight for San Francisco and never venture east across the bridge. Well, with the exception of the mandatory drive over the Golden Gate. But after that, I highly encourage you to stick around for awhile and check out the serene quiet and incredible beauty of the hills. You'll be glad you did!

One of the benefits of house sitting in different cities is that we have to travel to get to them. And after we left Oakland we had the extreme pleasure of driving down one of our favorite highways in the country, the Pacific Coast Highway, or "The 1" as the locals refer to it. Driving the PCH is an experience like no other. Riding along the California cliffs with whitewater surf filling the coves below is simply one of the most beautiful sites you can see. 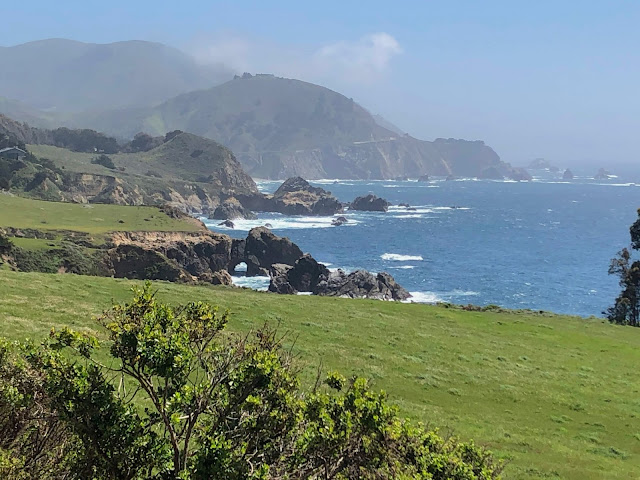 No drive along the 1 would be complete without a stopover to the Pfeiffer Big Sur State Park. Here at this magical beach you will find a sunset portal and purple sand.

This is Keyhole Arch where you can see a solar beam blasting through the hole, depending on what time of year you are there of course. This is also not my picture as we were not there at sunset, but my picture looks exactly like this without the cool sun-going-through-the-keyhole effect.


This, on the other hand, IS my picture and shows the amazing purple sand that makes up the beach. This is due to a large concentration of garnet minerals in the surrounding area. With every surf that washes up the purple sand mixes in with the white sand and creates sand art. It's really quite spectacular. 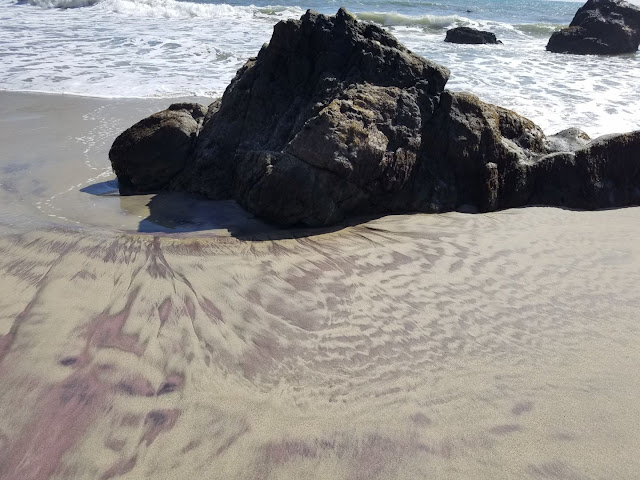 Not only is the Pacific coast shoreline ridiculously beautiful, but the entire length of the drive between the Bay Area and Los Angeles is dotted with charming, and sometimes swanky, seaside towns. We spent the night in a cozy little city called Morro Bay, which is famous for three things:
1. its giant rock called... well, Morro Rock. Not very creative but it is accurate. 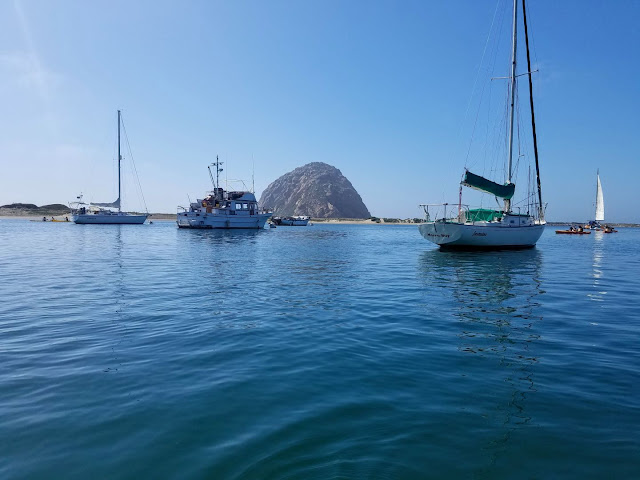 2. its sea otters. These little guys had almost vanished from the area but in the last several years have made a comeback. Now there are 60 or so otters in the bay and are a very popular tourist attraction. But even though the kayak rental places make it very clear you need to stay at least 50 feet away, we saw several people get much closer than that. I took this picture from a dock and zoomed in to enlarge it. They paddle around on their backs and hold their babies on their chests. It's too cute for words. 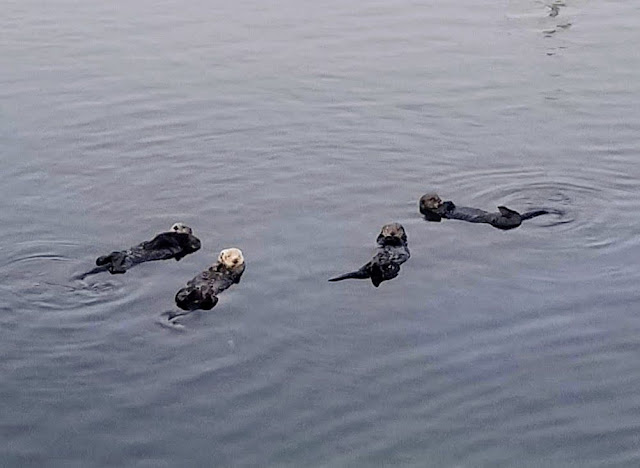 3. its sea lions. These guys are everywhere here and fascinating to watch. We stood on the dock one morning and watched one tear a manta ray to pieces for breakfast. A sober reminder that although they are adorable, they are NOT necessarily passive. In Morro Bay dozens of them gather on this barge thingy and make a huge ruckus when they all start barking. It's very entertaining to see. 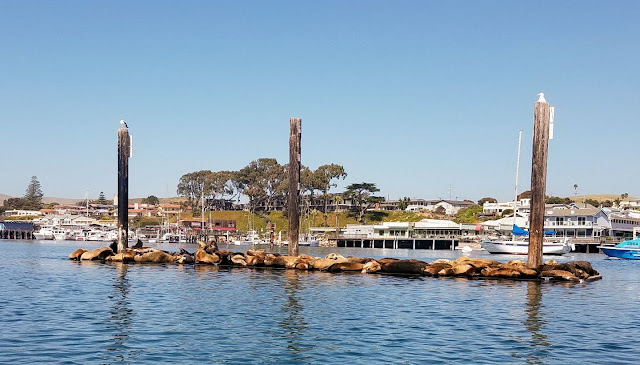 Morro Bay is just one of many towns you can visit on the PCH. Carmel-by-the-Sea is probably the most famous. We've stopped there for lunch in the past and found it to be very charming. My recommendation for driving the PCH is to give yourself a couple of days and take it slow. Stop at everything you can and just soak up the beauty. It's truly a national treasure that shouldn't be missed.

Ojai, CA was our PCH destination and next CA house sit this spring. This quaint city sits about 30 miles inland from Santa Barbara and 25 miles from Ventura. The house we sat for was literally surrounded by the horrific Thomas Fire in 2018. However, by some miracle the neighborhood they live in was spared and no one lost their homes. That being said, we did hike through the hills around the city and found it fascinating to see how nature repairs itself. Among the burnt black trees were new green saplings and lush grasses taking full advantage of the open sky and rich soils they sprouted from. The contrast was sad and beautiful at the same time. 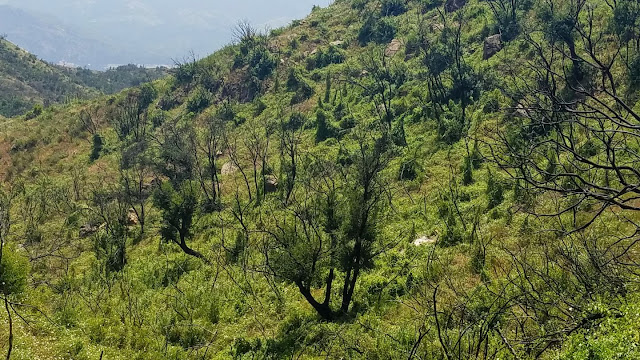 For this house sit we had the pleasure of taking care of two adorable Puli dogs, Barney and Zoe as well as one super sweet greyhound, Dresden. Pulis normally look like this...

...but the owners gave ours a shave because they had gotten into foxtails and had so many embedded into their hair that it was impossible to get them out. Here's what they looked like after the haircut. 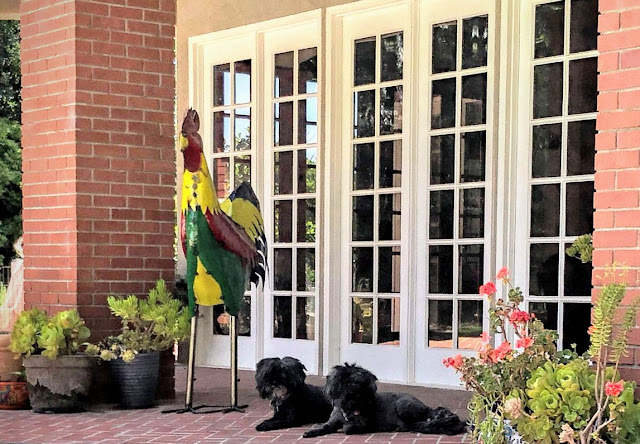 For some reason I never took any good pictures of Dresden so I borrowed one from friends of ours who did this same house sit earlier in the year. Thanks Mark and Liesbet! 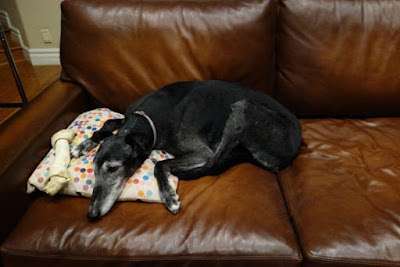 Ojai has become one of those "destination" towns that area Californians like to head up to for shopping and dining. Nestled in the short downtown strip are dozens of boutiques, restaurants, wine bars and antique shops. But just outside of town you can find unlimited hiking access to the surrounding hills and canyons, bursting with wildflowers and flowing with crystal clear waters. At least in springtime that is. 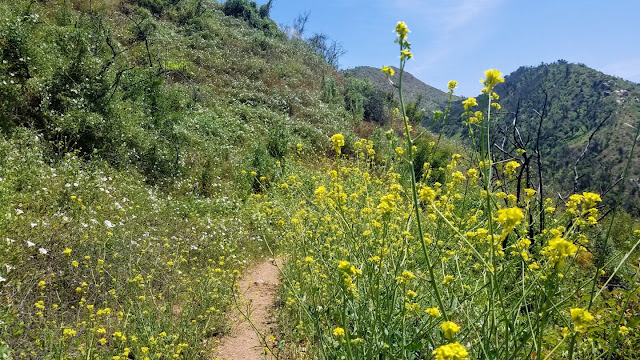 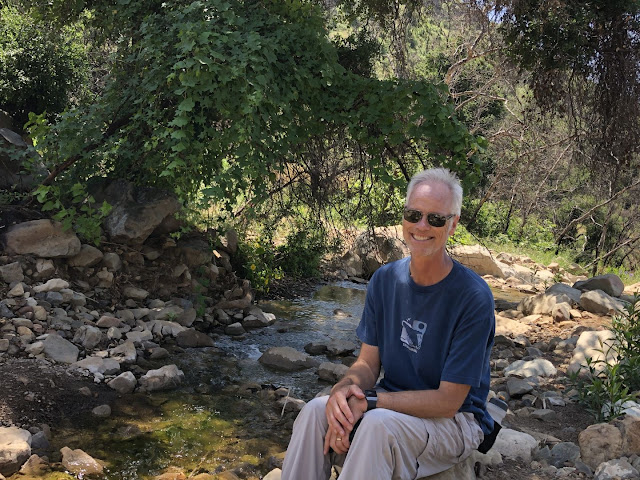 One bonus for us was that our very good friends from MN stopped by for a few days while visiting CA. Jim and Pat have visited us before in Connecticut and Denver and we always have a blast checking out the local sites with them. 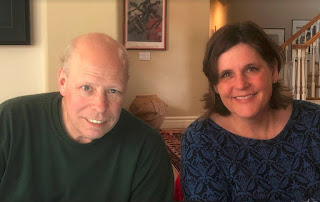 On this visit we did things like tour the historic Santa Barbara Mission... 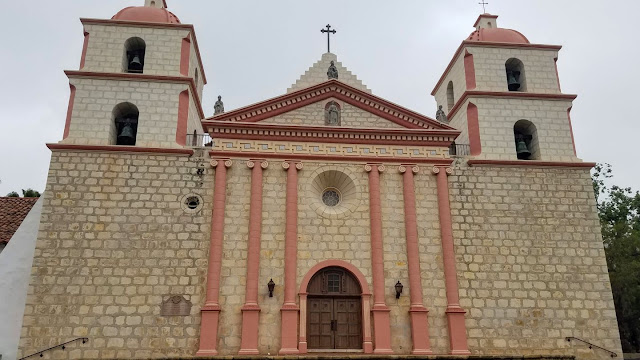 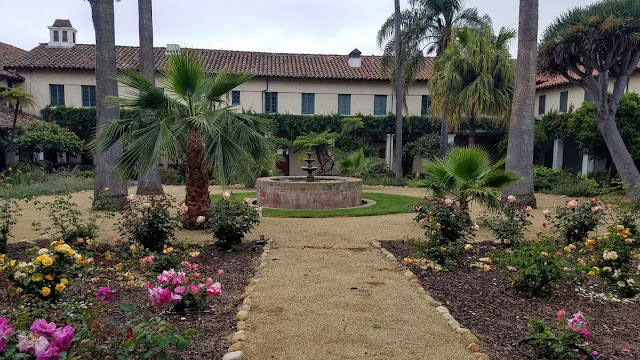 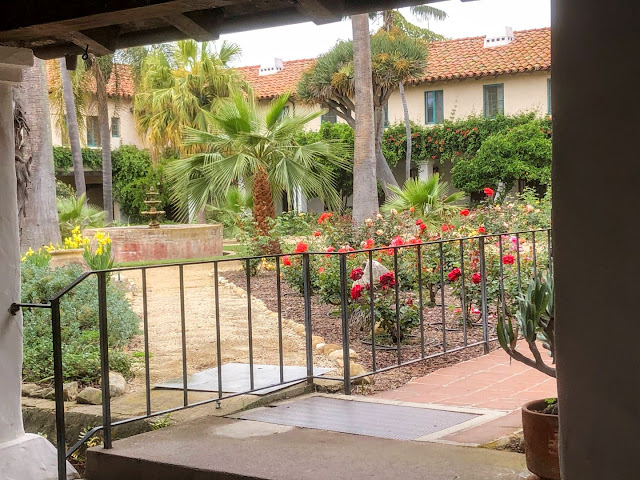 ... and have amazing Pixie margaritas at a delicious Mexican restaurant. Pixie tangerines are famous in the Ojai Valley and are grown locally, and they're as sweet as they look! 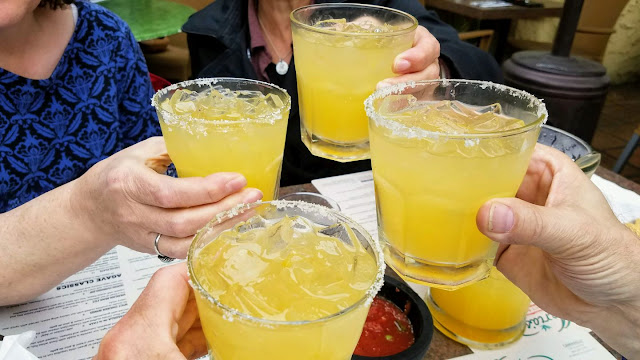 So that was our spring. Not a bad way to spend it if you ask me. After Ojai we headed back down to Irvine for a repeat sit through mid May. Then on July 1st we pointed our trustworthy little Prius toward the east coast and headed to Boston, which is where I'm writing this from now. By the way, our sweet little girl just celebrated her 225,000th mile and the dealer said she's in perfect health and could get another 200k beyond that. Now that's getting your money's worth!

So stay tuned for the next installment of what we were up to in May and June. Happy summer everyone!
Posted by Jeff and Charli Lee