Funny thing, this full-time cross-country traveling. Before we began house sitting, a 3-hour drive somewhere would require a nap once we arrived. But Aunt Martha's house is 150 miles away! If we make this trip we're gonna need to get a hotel. Now, after crossing the U.S. for the 4th time in 18 months, we look at a drive from Minneapolis to St. Louis and say, Hey, that's only 9 hours. After we get there we should go out for dinner and a movie or something!

In my last post I noted that we would be staying in Point of Rocks, MD, which we did, and was as fabulous as one would expect. It was fabulous because it was nestled right smack in the middle of a very historic part of the country. For example, Harper's Ferry is only a few minutes away and has a fascinating, albeit very bloody, civil war history. And of course Washington, DC was only a short 45 minutes southeast of us, so we were able to hop down there a few times and knock off the big checklist items that everyone should see, including a beautiful afternoon in a duck boat on the Potomac!


And then, just like Lewis and Clark themselves, our expedition took us from Washington DC back here to Portland, with the exception that we didn't almost die of starvation or freeze to death in Montana... or need to wait 6 months before we could continue across the Rockies. But other than that it was exactly the same.

See?... just like them. Lewis and Clark had to battle the Missouri River upstream for 2500 miles, and we had to battle headwinds in our Prius. Same thing.

And then there's Portland... ahh, sweet, sweet Portland. How do I love thee? Let me count the ways.

In our journey as wanderers we keep a pros and cons checklist of things we like or dislike about a city. We do this because believe it or not, we actually do plan on owning a home again someday... we just don't know where. Or when. Or what. Although we have ruled out a yurt as an option. That being said, there are a few cities that stand out as potential future home-base candidates, and Portland is definitely one of them. What's so special about Portland you ask? Well let me tell you!

1. A really cool downtown with all the "big city" kinds of things you'd ever want... great businesses, pubs, bookstores, parks, a world-class river walk and...

2. FOOD! OMG SO MUCH FOOD! Portland literally has a restaurant of one kind or another every six inches. Ok, that might be a slight exaggeration but it does have a LOT of restaurants.

3. And not only regular restaurants, but food trucks galore. Whether you're smack in the center of downtown or in any of the surrounding neighborhoods or suburbs, you will find pods of these amazing food trucks and trailers everywhere. And the best part is they have food for every palate. And they're adorable. 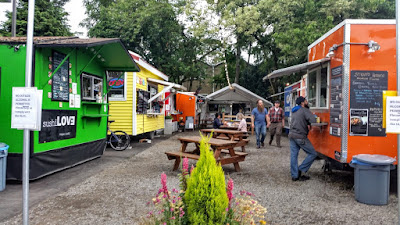 4. Lots of chic little neighborhoods. For example, the renovated Alberta Main Street Arts District in NE Portland is packed with every kind of charming little shop you could ever imagine - for nearly a mile!

5. The weather is perfect. Well, except for the rainy days and the gray, damp winters... but when it's not those things it's pretty darn perfect.

6. There are NO bugs! And to clarify, when a person from Minnesota says there are no bugs he means that you can actually be outside on a nice summer evening and not be stabbed to death by mosquitoes. This point alone ranks very high on our "pros" list for any city we evaluate.

7. The area is freaking gorgeous. Whether you're right inside the city at the rose garden or Forest Park, hiking through any one of the hundreds of nearby trails, or simply just looking at a snow-capped peak on the horizon, the area around Portland is among the most beautiful in the country.

8. The hiking is amazing. Just a short drive from the city center will put you on any number of stunning trails in the area. One state park has you walking past 11 waterfalls alone, two of which you walk behind! And for those of you who desire buns of steel, there are endless hill, waterfall and mountain climbs to be had in every direction.

9. Mass transportation options galore. For someone like me who doesn't like to drive in bumper-to-bumper traffic, being able to take one of the many rail systems or multiple bus lines is a huge benefit. Charli and I have taken the train from the 'burbs to downtown Portland several times and it just makes everything nice and easy.

10. It's weird! Yes, the stereotype is true. Portland is weird in all kinds of ways. The people are weird, the shops are weird, the art is weird and the attitude is weird. Even the life-long friends we've made here are weird, but then that's only because they chose us as friends.

So what's next for the traveling Jeff and Charli show? Why Canada of course! That's right... in just a few days we will haul anchor from Portland and spend the next couple of weeks in beautiful North Vancouver, British Columbia. That is if they let us in. I always worry that we will accidentally leave an old banana under the seat or something, and then they will detain and interrogate us and dunk our heads in buckets of maple syrup until we confess that we put it there on purpose.

But then again what could be worse than the torture we've already endured from Canada...

Posted by Jeff and Charli Lee No comments: